MVP vs POC vs Prototype: What Do You Really Need?

Have you ever tried to plan your duties to reach the expected results, whether related to daily deeds or any kind of technological implementation? If you wonder what are the best ways to deliver a successful and expected product, then you may go further cause in this article, I’m going to introduce some useful and effective approaches related to MVP vs POC vs Prototype, so that you may easily identify what you really need. The following article covers:

If you think you may find the answers to your questions, then go further because I’m going to introduce detailed information so that you may easily find the best possible solution for you. Let’s go!

What is the POC?

The term POC stands for Proof of Concept, and it is exactly what it sounds like. In this scope, the concept is the idea (for instance, related to an app); the proof is a kind of action you tend to take to make sure your idea resounds with thousands of other people.

What you shouldn’t do is just blindly building your application. Instead, you should check whether the expected app rises interest and whether there is an anticipated requirement among users. In another way, you’ll waste your time, budget, as well as efforts. 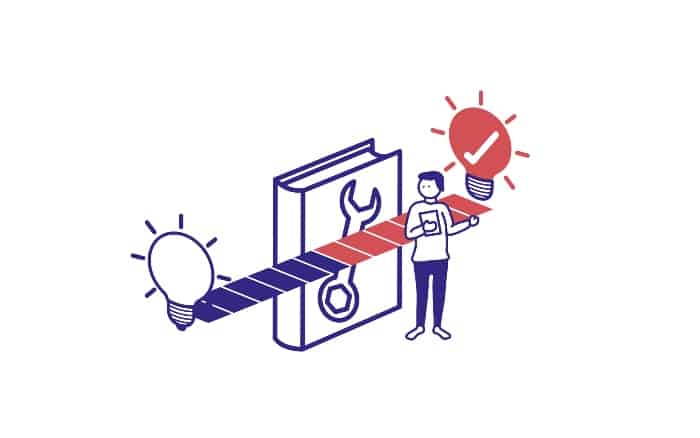 To get a POC, you can make use of manual tools such as spreadsheets, emails, and SMS messages. Keep in mind that everything depends on the ways you choose to interact with the target audience for whom you aim to build your application. Once you get positive feedback (for instance, a large number of registrations, interest in the form of asking questions, as well as presales), then you may convert the proof of concept into your digital product.

POC is the question, “Will it work?”. It is all about testing if your idea is practically achievable. In software development, POC is a technical exercise or a small inner project that identifies whether or not a certain idea has valid potential.

What is the Prototype?

If a Poc determines what kind of product you should develop, then a Prototype identifies how that product will be implemented, what kind of look it, how it will be used, and where it can be done. It is a crucial stage in a software development process cause it helps you identify core app flows, the usefulness of the application, and certain features to test out. 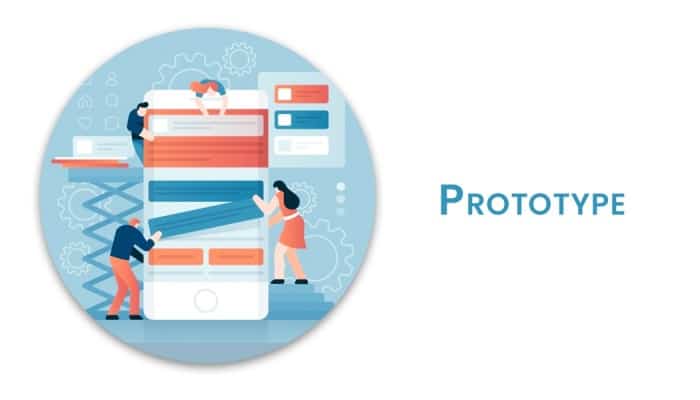 The Prototype is an interactive system model that lets you visualize the user experience. Your end-users give you useful feedback through a prototype, which can point out some errors related to design or development, as well as bring out new ideas or features to make a reality. Checking out the results of your app research and strategy isn’t enough. What you need is to work on your prototype in order to get the look and function of the application without even having to go through the complicated development process. Keep in mind that prototyping is a beneficial exercise to learn how people tend to react to your expected product.

What is the MVP?

Have you ever asked yourself, “What does MVP mean?”? The MVP acronym stands for Minimum Viable Product. If you have already checked out one of our previous articles related to it, you already know the MVP meaning and how to build an MVP.

More concisely, the MVP is an initial version of the technical solution - the work in progress. In such a situation, the main point is to market the expected product as soon as possible and get real people to use it, so that you may ask for feedback, and edit the product or add the necessary features. We may say that this minimum viable product is a useful method aimed at supporting app owners to understand whether the audience would like to download the application that they try to develop. 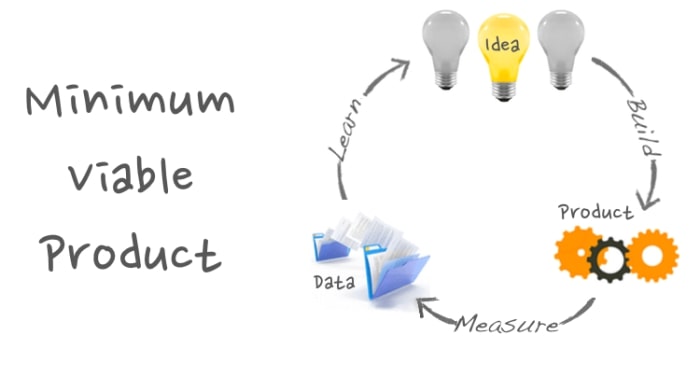 However, a lot of businesspeople still consider this concept to be confusing and tricky. The most common misconception related to MVP is that nobody would put out an incomplete product in the market. That is the reason why many people try to avoid this factor as what they don’t know is that the identification and implementation of this concept are crucial to application success. Due to an MVP, you may prevent wasting your time and resources on creating solutions that people would not like to use.

Yet, an MVP process defines the users’ pain points during the process when your app is tested in the target market. An MVP approach represents the primary value of the expected product and provides an answer to the question of whether or not it is viable. First of all, you introduce an app that looks complete with the necessary convenience required for running the application. Your next step is to begin developing the base of potential users and find enthusiasts willing to buy or try the product.

Later, based on the user feedback, you can edit the product to offer a better, cleaner, and clearer solution. While enhancing the app functionality and process, you tend to improve the value and increase activity. Finally, an MVP lets you maximize the ROI (Return on Investment) with each release version and move to a fully completed application. 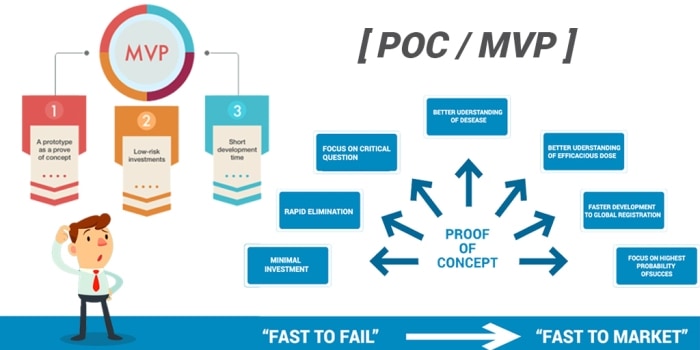 Both the MVP and POC are methods used to confirm the expectations of the final product. Due to these methods, you save time and money. However, each of them has a unique purpose. The MVP is a product that has minimal features to be viable. The main purpose is to deliver the minimum version of the product to the market in order to identify whether your product is valuable and worthy to make an investment. On the other hand, a POC is developed in order to authenticate some technical expectations before going on the development. If you still confuse about POC vs MVP, I have a piece of advice for you. Just keep in mind that if you hesitate about something technical, you build a POC (not an MVP) to understand whether it works or not.

Although a POC and Prototype are sometimes used correspondently, both have completely different meanings. As we have already discussed, proof of concept is a project that aims to identify whether or not it’s possible to convert a certain idea into reality. While a POC suggests a model of one aspect, a prototype is one working model for several aspects of the expected product. The prototyping is used to discover system errors and test the product design, usability, and sometimes functionality as well. 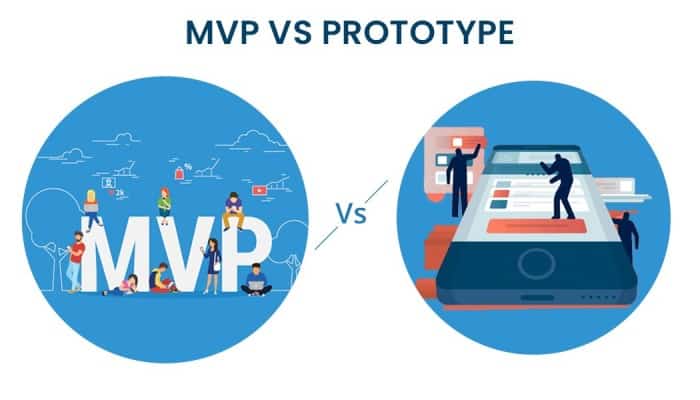 From POC to Prototype to MVP

If you have ever tried to choose which is better POC vs MVP vs Prototype, then you should also have considered developing a product that passes through each of these steps. Below you may find the benefits of such an approach.

Test the concept: Before investing in development, you get a chance to test how well the idea is recognized by your target audience. The “from POC to Prototype to MVP” approach of developing a product is to realize whether your idea is viable. Yet, you may adjust your initial idea considering how your audience feels about it.

Fast development: While developing a product with this approach, what you need is a minimum set of features. As we know, it takes more time to deliver a fully completed product. That’s why you cannot take the wrong direction. You had better save time and choose the path from POC to prototype to an MVP.

Loyal Users: Giving the users an opportunity to interact with your product at the stage of prototyping, you already generate some enthusiasm as well as brand awareness.

Quick feedback: Although you may have some expectations about how your product will function and look, yet, your beliefs may not adjust with what the users have. So that the quicker you get user feedback, the sooner it will be possible to adjust the product to user demand.

Low investment risk: It is said that investors tend to support your idea once you ensure that the risks are low. Once you have a proven concept and a tested prototype, you may present your product. It’s easier to get sponsors for your app development when you can provide strong evidence.

Have you already chosen your way of delivering the product to the target market? Share your ideas, and we’ll together overcome the complex process to provide your users with a valuable digital product.

What is the Best Programming Language to Create a CMS